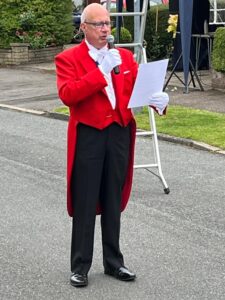 …and back from an enjoyable cruise round Italy. Now looking forward to weddings and other events in my busy calendar after undertaking the (slightly less formal) role of Master of Ceremonies at a few non-wedding events.

On Sunday 5th June, the residents of St. Mary’s Avenue in Eastbury, SW Hertfordshire, celebrated the Platinum Jubilee of HM Queen Elizabeth with a street party; I was again delighted to serve as MC for the afternoon. The street was closed to traffic at midday, tables and benches brought on to the road, and bunting stretched across the street. The party was formally declared open by Molly, our senior resident, cutting the ribbon to cheers and great applause, and for the next hour, residents and guests mingled, enjoying a concert by our resident musicians before being called to tables for afternoon tea. I read out a  letter sending loyal greetings, which I had previously laid before Her Majesty, and the opportunity was taken to pledge our continued allegiance to Her Majesty. 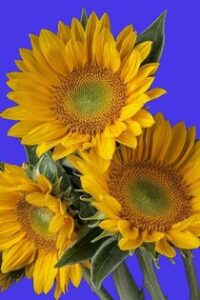 …and the green shoots of business are already showing. I have had a sudden uptick (new word) of enquiries, with confirmed bookings for a Masonic festival, an awards dinner, and several weddings later this year and next. The residents of St. Mary’s Avenue in Eastbury have started planning another street party to celebrate the Queen’s Platinum Jubilee, and I expect I will be donning my hunting pink livery and once again officiating as Master of Ceremonies.

It won’t be long before the frogs and dragonflies return to my wildlife pond. I’m not sure what happened to my snowdrops (those pesky squirrels perhaps?), but at least the crocus and daffodils have put in an appearance.

Last month I booked a weekend break at a sea-front hotel in Brighton, so that I could see my daughter and granddaughter. Within minutes of my completing the online booking, I received an invitation from the hotel to exhibit at its wedding open day that Sunday. I met some interesting couples and suppliers, so maybe this will lead to gigs on the south coast. I look forward to meeting more engaged couples (and suppliers, of course) at wedding fairs over the next few months.

I don’t think anyone can fail to be moved by the horrific images coming out of Ukraine at the present time. The sunflower is the national flower of Ukraine, so let’s start posting its picture all over Facebook and social media in support of the Ukrainian people.

Origins of the Wedding Cake

There are many stories about the origins of the wedding cake, and most of them are about as believable as the one I’m about to tell you…

…and if you want hear the rest of the story, drop me a line.
(Video clip by Martin Aust – Posterity Video)