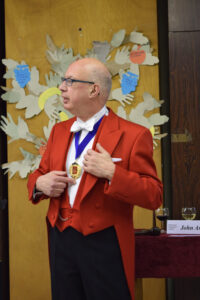 History & Role of Toastmasters at JACS

In the late 19th century, a Toastmaster by the name of William Knightsmith was becoming increasingly frustrated at being addressed as a waiter by members of the assembled companies that he was attending. Having explained this to his wife, she suggested that he change the colour of his coat to make him stand out.
William Knightsmith started to wear a scarlet jacket, much to the amusement of other Toastmasters, who ridiculed him and thought it a joke. He was seen by the then Prince of Wales (later King Edward VII), who approved of the colour and within a year, nearly all Toastmasters in London were wearing it. Soon after, the ‘hunting pink’ tailcoat became the adopted form of dress for all Toastmasters. The name is derived from Mr Thomas Pink of Jermyn Street, the tailor who designed it.